Before me is a lemon seed.  Dried pip.  Forgettable fleck.  It makes my heart a bit sad.  Promise of yellow, source of blue.

My daughter has a rare taste for lemons.  She devours the juicy wedges like you or I would pop orange slices.  My mouth curls at the sight.

During a recent citrus binge, she picked out all of the seeds and told me she wanted to grow a lemon tree.  We set the seeds to dry on a napkin.  The seeds migrated throughout our home and eventually came to settle on my desk on a little ceramic tray, a Barcelona souvenir with an imprint of Picasso’s “Don Quixote.”

Most of the seeds have disappeared.  A mere sneeze sends one on its way.  I expect lemon trees to crop up from my office carpet someday.

Two Decembers ago, my daughter and I were at a tree farm cutting down our annual Tannenbaum.  Our tradition consists of her selecting a tree, then of me hacksawing it down and playing out a World’s Strongest Man fantasy, hefting the evergreen on my shoulder all the way back to the farmhouse for coring.  (Then calling a chiropractor the following Monday.)

On our way from the farmhouse to the orchard, who should walk by but Santa Claus.  No staged St. Nicholas ever better looked the part.  His hair and beard were a silvery Aslan mane.  His suit the purest velvet and richest fur.  If he had uttered, “I see you’ve been a bad boy this year,” I would have crumpled and wept. 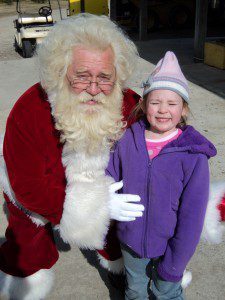 My daughter reacted as any little girl would.  She ran up and wrapped her wee arms around Father Christmas.  “Santa!”

His hearty “Ho!  Ho!  Ho!” popped the stocking cap right off her head.

I cringed in anticipation of the ensuing exchange.  My daughter and I had already postmarked our “c/o North Pole” letter to the giving saint.  Now she would request the impossible in the flesh.

Santa’s voice boomed, “And what would you like for Christmas?”

“Magic Powers!” my daughter burst forth.  “Real magic, like the fairies and the unicorns and the mermaids have!”

Oh boy, I thought.  Now even the mermaids have magic.

“Yes!” my daughter beamed.  “And tickets to Disney World and a camera!  And a magic chicken!”

Santa lowered his spectacles and shot me a look.  His message was clear:  “Hey, buster, did you get all that?”

Tickets to Disney were easy–I just needed to cash out my retirement plan a few years early.  But magic powers were hard enough; where the hell does one find enchanted poultry?

Santa’s jolly jelly shook, “These things you shall have, little one!  Now promise Santa you’ll be a good little girl ’til Christmas morn!”

With a final round of hugs, Santa went about his way, and we ours.

There has never been a greater yuletide miracle than the one that placed a magic chicken ’neath our Christmas tree.  With tickets to Cinderella’s Castle, to boot.

As to magic powers, well, back to lemon seeds for now.

On a lark the other day, I snatched up a children’s picture book at the library entitled Martín de Porres: The Rose in the Desert and stuffed it in our bag of Nancy Drew, Cam Jansen and Ralph the Motorcycle Mouse opuscules.

I had some Catholic convert notion that St. Martín was a figure akin to St. Francis and that this tale might be worthy of a future Sunday evening devotion to selflessness.

Several pages into our reading appeared the image of St. Martín’s magic lemon tree.  The poor Peruvian’s citrus miracle.  Drop a seed, and the next day, bounteous branches bursting with fruit day in and out until the end of time.

My daughter leapt from the La-Z-Boy arm.  “The seeds, Papa!  The seeds!  Where are the seeds!”

Which is when a father suddenly realizes:  the universe is tragically devoid of magic.

You gave us nebulae and quasars.

But not wizards in floppy hats.

You gave us electric eels and monotremes.

But not flying horses that leave rainbow trails.

You gave us whirlwinds and tempests toss’d.

But not talking dragons or griffins or basilisks or magic wands with which to subdue such scaly miscreants.

How is it that a blind Argentinian can imagine an hexagonal biblioteca total, but the real world consists of plastic library cards?

And it falls to me time and again to break the news to this imaginative young girl.

Back to Magic Chicken Noel.

The other present my daughter opened that Christmas morning was a microscope, accompanied by a letter from Santa Claus explaining that magic powers are not really within his purview to provide, but that science is a kind of magic.  Science teaches us how the universe works and, from its mastery, we can shape the world accordingly.

At first my daughter’s face hung low, as I expected.  She had hoped for a quidditch broom, but Santa had delivered a wrapped Swiffer.

Yet once we put snowflakes and dragonfly wings and Rice Krispies puffs under the lens, the tool became a pathway to wonder.

Gradually, my daughter’s world is dividing into constructs of mythology and reality.  Some characters are in a transitional state; she speaks dualistically about Disney Princesses; they are both real and imaginary.  (No different than how the far, faraway Star Wars galaxy remains for me in some respects.)

She still believes in Santa Claus.  As do I–though I was a nonbeliever until I met him at the tree farm that day.

Fair enough.  You’re not the only one who holds out for Daryl Hannah with a fin.

Then along comes a tale of a miraculous lemon tree, and the simple belief in all-things magic washes over her anew.  Again, her universe is peopled with talking beasts and nymphs and dryads and meliads and oceanids and on and on.  And Belle and Snow White and Jasmine dance in the grand ballroom of Cair Paravel with Caspian and Edmund and Peter.

And then the magic lemon tree is debunked, and the world returns to its somewhat disappointing self.

Yet this little lemon seed remains.

It is time to put this dried spark under the microscope.  Time to study it and consider the promise of life within.  Time to buy some dirt and a hefty pot.  Time to bury the seed, and while we wait for it to sprout, to check out a book or two from the library and learn how plants grow.

Perhaps someday a technology will come along that gives us instant additive lemon trees.  Until then, a seed in a pot and a water can and sunshine will have to suffice.

As a father and fellow dreamer, I join my daughter in the lament that the real world is never as enchanting as the one humans can imagine.  I believe the Maker falls a bit short in this regard and could stand to learn a bit from little girls and grownup boys.

After all, consider a universe wherein exists the possible charms of magic chickens.