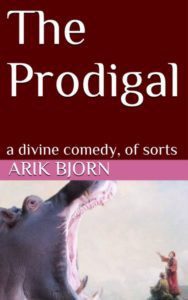 a divine comedy, of sorts
Book I: Hell

With The Prodigal, novelist Arik Bjorn has reshaped The Divine Comedy and hell in the image of the contemporary world. Throughout the course of one fateful day at the beginning of spring, a down-on-his-luck, soon-to-be-divorced theologian, Dante Peccato, finds himself wandering the labyrinth of Washington DC in search of a long-lost love, now turned adult film star. Along the way, Dante dodges a great cloud of madcap characters, including the man with the red horns himself—who may or may not bear an uncanny resemblance to Maurice Chevalier.

As author and narrator wrestle between the lines and around the margins for control of the work, the nation’s capital reveals itself to be every bit a superb contender for Inferno. Its street vendors, adult entertainment spots, bookstores, subway system, and even the Smithsonian museums themselves reveal all that is outrageous and tragic, and perhaps even a bit diabolical, about humanity as it slips on banana peels into the third millennium.

Also, readers will enjoy a choose-your-own-lexical-labyrinth section, a valiant German shepherd, a cat that won’t stop dying, and something astonishingly sesquipedalian. Finally, the Problem of Evil itself is revealed deep within the bowels of the nation’s capital.

The Prodigal was written over the course of more than two decades. It takes place the day after the vernal equinox in 1998. Its publication coincides with the 700-year anniversary of Dante Alighieri’s completion of The Divine Comedy.

or, Life in the Time of COVID

Welcome to the pandemic apocalypse! Here is a stay-at-home response to the Hollywood contagion blockbuster currently playing out in our living rooms, juxtaposed against the timeline of the dumbasses in charge of the United States.

Here are the social media posts by Arik Bjorn about events that simply couldn’t have been penned in the zaniest science fiction book. Present reality is far beyond anything the most imaginative folks could have invented. What mind could conceive an Orange Dung Gibbon overtaking the planet? (Please no references to Pierre Boulle.) But, damn, it’s just that way.

Smile for the camera! Say COVID! Time for a selfie at world’s end!

a modest book
of verse

“Arik Bjorn has proven himself a worthy chauffeur of the written word.”
.—Carol Baker

Arik Bjorn is a public librarian, and was the 2016 Democratic Party/Green Party fusion candidate for South Carolina’s Second Congressional District. His writing has been featured at Forward Progressives and Patheos, and he has been read by lots o’ folks in 190 countries.

Bjorn holds degrees in archaeology, ancient languages and library science. He is the author of seven other books, including a novel, The Prodigal (2020); a short story collection, Birds of a Feather; as well as a book about his experiences during Campaign 2016, So I Ran for Congress. Pocket Lint is his first book of verse.

From the author’s introduction:

Language is my love. What if I weaved words through an abstract loom, and the aesthetic result resembled Babar hanging from a bent steel crane? That is the risk of poetry—of sin.

I have no idea whether my poetry is good or bad, whether it’s worth the while of any reader. I know accomplished poets, yet I would never burden any of them with an invitation to write an introduction for this work. My verse deserves no vicar.

As to title, why Pocket Lint instead of, say, Slaying Pachyderms? If I’m being honest with myself (what other approach to poetry is there?), what are harrying mammoths to me are perhaps just tucked-away dust bunnies to you. Language has survived many onslaughts, many sieges. Mine won’t be the last.

Maybe I shouldn’t be so hard on myself. I didn’t ask for these phantoms that only exit my head by way of nocturnal keyboard stabs. Poetry is also self-defense. Sometimes one sins to save oneself.

So I Ran for Congress

“Arik’s righteous anger served as our Francis Marion—
his insight and wit initially inspired our Blue Brothers bonds,
and he drained the swamp with microphone and mouse. …
The South Carolina Blue Brothers fight to this day for a better South Carolina.
For a better United States. And we remain, as ever, Stronger Together.”

So I Ran for Congress chronicles Bjorn’s uncharacteristic first race for political office: “It was 2016, the Election to end all Elections. Bernie the Democratic-Socialist versus Hillary the Glass Ceiling Smasher—with an Orange Fascist-in-Waiting stomping about in Goliath-like fashion on the other end of the political spectrum. Yet Civilized Voters in South Carolina’s Second Congressional District were in danger of having no champion for their Voice for a third straight election cycle.”

Bjorn, a single father, worked full-time as a public librarian while campaigning. He was only the second candidate ever endorsed by the South Carolina Democratic Party before its state primary. Bjorn was also endorsed by the National Education Association Fund, SC Equality, the Alliance for Retired Americans, the South Carolina AFL-CIO, as well as a number of national labor unions, including the International Brotherhood of Electrical Workers, the International Union of Painters and Allied Trades, the National Education Association and the Teamsters. The Bjorn for Congress campaign slogan was “There’s a Better Way!”

From the preface: “Political campaigns are loaded with grind and reward. FEC deadlines, policy position research and debate prep are tedious and brain-wrenching, but occasionally you catch a glimpse of a Founding Father and Mother smiling at you from the Constitutional beyond. You are a major party federal candidate daring to speak on behalf of ‘WE the People.’ Just, wow.” 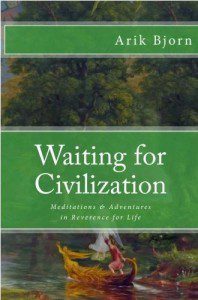 Meditations and Adventures in Reverence for Life

“He has a Renaissance Man’s devotion to knowledge
and a seeker’s dedication to the search.”
.—Bob Kincaid, radio personality
and host of The Head-On Radio Network (The Horn)

Civilization exists, right? After all, humans have walked on the Moon and sent robotic rovers to Mars. But Arik Bjorn argues that humanity has only just begun taking baby steps toward Civilization. Otherwise, there would be far more advances in global food programs and virtually no public sacrifices of zoo giraffes and Parisian cartoonists.

In this collection of essays, Bjorn examines the ape hate that still reigns inside us—from Haiti’s Auschwitz to squashed caterpillars to the Confederate Flag—and makes the case that a global foundation of Reverence for Life must be laid before True Civilization can exist. Every person has a part to play in establishing this foundation: “It will in fact take tens of billions of acts of kindness and thoughtful gestures to finish laying.” Only then can the world attain Martin Luther King Jr.’s “audacious hope” for humanity.

“Arik is one of the most eloquent writers I know …
He is one of today’s true progressive leaders.”

The R-Rated Theologian is an anthology of unabashed Progressive Christian essays by Arik Bjorn, frequent contributor to Forward Progressives and Patheos. 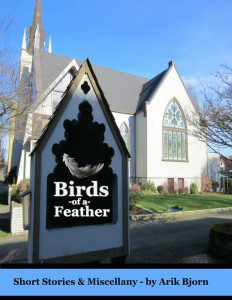 Birds of a Feather

“As a writer, Arik Bjorn is brave, hilariously funny and determined to wind words around my feet until I trip. Somehow, I am always a better person for having tripped.”

Birds of a Feather: short stories & miscellany is the debut work of fiction by Arik Bjorn. With these five short stories and one slap-happily true essay, the author responds to his fundamentalist Christian background and counters with rebel angels (“Indiana”), resurrected humanists (“Vonnegut Lives!”) and imbibing ministers (“Birds of a Feather”)—plus divinely-disappeared red states and farting orange tabbies. Bjorn imagines a fresh Christian mythology that runs Möbius strip circles around the apocalyptic-poppycock fiction of Frank Peretti and the Left Behind series.

A Sermon Under the Mount in Three Essays,
plus a Short Story about Kurt Vonnegut

“I enjoyed Why Bad Things Happen to Good Parrots as much as I enjoyed
Mark Twain’s Letters from the Earth — and that is saying a heck of a lot.”

In Why Bad Things Happen to Good Parrots, author Arik Bjorn explores the Problem of Evil, the magic chicken multiverse, and chimichanga cosmology—plus there’s a bonus tribute to the late, great author Kurt Vonnegut. Bjorn is determined to dig his way to the center of the theological mountain—even if all he has is a trusty garden trowel: “I have always wanted to aim my keyboard directly at the Creator and ask several pointed questions not about how to live, but about why we are alive.”

In the title essay, “Why Bad Things Happen to Good Parrots,” Bjorn presents a heartfelt reflection 20 years in the making on Theodicy, or the Problem of Evil, “under the collective shadow of Aslan, Frodo and Freddy Kreuger.” In “Magic Chickens, Lemon Seeds & a Universe Sans Unicorns,” he wonders why the Creator presented us with this Universe, so absent in miraculous lemon trees, when human beings seem so good at inventing more interesting ones. And with “The Science Fair at the Edge of the Universe,” Bjorn contemplates Creation prequels, such as a divine spicy midnight snack that may have led to the Big Bang. In the concluding short story, “Vonnegut Lives,” the author makes up for the fact that writer Kurt Vonnegut left our Little Blue Planet without appropriate ballyhoo.