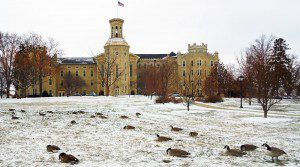 Or as we say down here in South Carolina: I do declare…

I have never been to an “official” Wheaton College Homecoming. This might be because I’m not one much for “hot drinks” that don’t include nips of Jameson.

Also, I’m not really one to hang out these days with Evangelicals who refuse to recognize the accomplishments—much less the existence—of my many proud LGBTQ OneWheaton pals.

I gather that my little ditty is not going to be read aloud from the steps of the Billy Graham Center by Cindra Stackhouse Taetzsch, Director of Alumni and Parent Relations and Executive Director of the Wheaton College Alumni Association.

That’s too bad. She has such a lovely smile in her photograph. I would have loved to watch her read my words aloud to the gathered throng of “recognized” Wheaton alums.

But I digress. My friend, Costa Tsiatsos, asked me if I would consider addressing you with a witty message. However, he neglected to inform me where my message would be read from.

Goodness! Did I just end a sentence with a preposition?

Behold, my fellow Wheaton Graduates, the impact of cheap red wine upon your liberal arts-trained grammatical skills! This evening, Baphomet walks among you in the guise of Bacchus grapes!

Anyway, if you happen to be gathered anywhere near Adams Park this evening, I just wanted to let you know that…

that, in 1996, I left a bottle of cabernet under a park bench by the tall oak tree. It’s probably turned to brandy by now. You might also find a pack of Kamel Red cigarettes nearby. Whoever finds it should have a grand time.

And as long as you’re over by Adams Park…

that when I left Wheaton, Illinois, back in 1997, I may have “forgotten” to return several dozen library books on Christology from the Wheaton Public Library. (What other small public library on Planet Earth carries the entire oeuvre of the great Belgian Roman Catholic theologian Edward Cornelis Florentius Alfonsus Schillebeeckx? That is: used to carry.)

Any-who, I’m guessing that, any day now, my library fine will soon overtake the total of my student loan debt. By the way, who would actually charge someone for neglecting to return John P. Meier’s The Marginal Jew: Volume II?

Way back when, in the mid-1990s, when I attended Wheaton College, a Great Revival took place one year. Unfortunately, I was very busy planning a master’s thesis on word scrambles that one can make from the name “Malcolm Muggeridge” and could not participate.

By the way, did you know that you can make the words “Clammier Demagogue” from “Malcolm Muggeridge?”

Now where was I?

Ah yes, the great Wheaton College Revival. Spiritual fervor overtook the campus that year, and for a several-day period, students were allowed to climb upon a stage and confess all manner of illicit behavior—in front of administrators, no less—without fear of expulsion or reprisal.

Hundreds of students admitted to fondling boobies, drinking Nyquil, making out in the Gables parking lot. Even skipping chapel. And everyone got away with it scot-free. Everyone except me, that is.

Let’s see. If you spell “aglimmer,” you still have enough letters left over for “mugged.”

Now that I have your captive, simul-justus-et-peccator attention, I would like to make up for that lost week of spiritual release. I have a lot of things to get off my 41-year-old, hairy chest.

that in two years of undergraduate study and two years of graduate school, I attended chapel once. Yes. Just one time. And for a mere $150, I will be happy to share with any current Wheaton College student the trick to getting away with it.

that one bright Saturday morning, I awoke in my roommate’s bed in my East Harrison Avenue annex apartment in a pretzel-tangle with three other hung over male coevals, covered in Goldfish Crackers and smelling rather quite a lot of Johnny Walker Red. There also may have been a saxophone.

that I smoked a cigarette—well, maybe more than one—in the basement stacks of Buswell Memorial Library while flipping through issues of Aperture magazine. This was one of the greatest benefits of being student supervisor of circulation during the night shift.

(I smoked rather a lot at Wheaton—to the point that one day, my advisor, the wonderful, sagacious, Dr. BLANK, told me, exasperated, “I love you like a son, Arik! But how am I supposed to defend you to administration when you show up in my class smelling like the R.J. Reynolds factory?!” By the way, I’ve since quit smoking. Nasty vice, that.)

that I masturbated in every Wheaton College residence I ever lived in.

Oops. Not another dangling preposition (if you know what I mean).

Anyway, big deal. You did too. Okay, now for the serious stuff.

that I wrote about the suicide of Hope Ritchie in the Wheaton Record, when it seemed like administration just wanted to sweep that tragedy under the carpet. In fact, here are the words I wrote in my column, “Laocoön’s Altar,” on October 25, 1996:

The suicide of Hope Ritchie at the beginning of this year should have brought our community to its knees! It did not. It should have struck us like a freight train. We cannot allow it to be just another horror that is swept beneath the rug of false pretenses. Hope needed us. We failed her. I failed her.

By the way, you’ll notice by the second paragraph that I was only about midway on my path to becoming an LGBTQ ally. (Many of you know that I grew up being taught the “hell-bound abominations” of homosexuality.) At that time I wrote those words about Hope, I had befriended several closeted gay students, who, at great risk to themselves, had reached out to me to be open about their closeted selves. Those friendships ultimately made it clear to me that I should never lump “homosexuals” into a list of general hamartiology.

So while we’re at it, I CONFESS…

that I still had a lot to learn about Christian love while at Wheaton College. But the one thing I damn well knew for sure was that, as a community, we weren’t going to get anywhere by hiding everything that we weren’t sure about under a bushel.

that I became divorced while a graduate student at Wheaton. I wrote about it briefly in a short story, “Wingman,” that I published awhile back on the OneWheaton blog.

Boy, I wish you could understand the pressure that administration and fellow students placed on me about that decision. The judgment was extraordinary.

How could I do this?! Didn’t I know I would be one of the only people in the history of Wheaton College to get divorced?! What would Jesus do?!

Thankfully, I was—I CONFESS—attending an Eastern Orthodox church at the time. And the priest, Father Bill, embraced me with warm, though honest, compassion. (Gee, kind of like ministers are supposed to do.) He explained to me that sometimes adults make poor choices and that we shouldn’t be surprised when those choices result in broken relationships.

In this case, he couldn’t have been more right. My wife and I did get married for all the wrong reasons. But our marriage didn’t end because there was colossal fighting or any other drama—just the realization that our lives were never really meant to be conjoined, and that our paths were forking—had forked—in very distinct directions.

By the way, my ex-wife is now married with twins in North Dakota. And I am the world’s proudest father of a bright little first grader who’s already reading the Little House on the Prairie and Black Stallion series. And those three lives never would have existed had my ex-wife and I kowtowed to Wheaton’s fundamentalist inflexibility.

I am glad I followed my conscience then and that I continue to do so now. In fact, look where it’s led me today: right to you!

I need to get back to that Malcolm Muggeridge word scramble paper.

Let’s see, if you rearrange the letters this way, you can get “glaciered orgiac” and still have a “mum” left over.

With my parting words this evening, let me remind you that Wheaton magazine may never recognize your existence. Also, sadly, neither you nor I are likely ever to be invited to address the campus at a chapel—not that I could even find Edman if I tried.

As a twice-divorced, Roman-Catholic-convert, vocal progressive signer of the “we can’t stand Wheaton’s opposition to Obamacare” letter, the Wheaton College Alumni Association took me off its mailing list long ago. Hell, they don’t even bother to call me for donations. Now that’s a divorce!

But at the end of the day, who gives a shit? We have each other.

I do declare! Now give each other a hug, go get drunk and streak the campus.

This address was read aloud to the gathered throng at the “unrecognized” Wheaton College  Homecoming event on October 3, 2014.