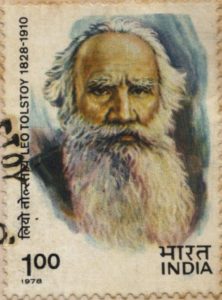 Any of the tens of millions of Internet users who headed over to Google today noticed a special Google Doodle marking the great Russian novelist Leo Tolstoy’s 186th birthday. Normally we associate the literary Count with epic tomes like War and Peace and Anna Karenina. We think of glimmering ballrooms with officers in full regalia and dames in dazzling dresses, of trains speeding across snowy tundra, and of a whole host of unpronounceable surnames that send many of us rushing to George R.R. Martin as the 500-plus-page novelist of choice. (Besides, Tolstoy didn’t provide much in the way of dragons.)

While many associate Tolstoy’s works with military campaigns, such as the French invasion of Russia and the epic novella Hadji Murat, few realize that Tolstoy was a pivotal figure in the 20th century peace movement. In fact, his staunch anti-militarism cost him his communion with the Russian Orthodox Church: “Leo Tolstoy, who felt only contempt for militarism, enormously admired those Doukhobors who refused to bear arms, came to their aid and incurred the strongest disapproval of the state, including excommunication from the Orthodox Church.”

At the turn of the 20th century, as the author approached his 70th birthday, Leo Tolstoy found himself in a philosophical conundrum. In his essay “On Anarchy,” he wrote that it was clear in his mind that “there could not be worse violence than that of authority under existing conditions.” Then again, the revolutionaries of his day insisted that the only way to secure a new world order and justice for the common man was via violence.

Tolstoy was not a fan of tit-for-tat. Neither was another man, an Indian who nine years later, in 1910, would reach out to the great Russian writer for some much needed advice and encouragement. Perhaps you’ve heard of him. He signed his letter M.K. Gandhi. (Yes, indeed, that Gandhi.)

Many readers will probably be shocked to learn that Gandhi and Tolstoy not only corresponded with one another, but that Gandhi cited the great Russian author as one of the three most important influences in his life. In a 1928 speech, Gandhi also stated that after studying Tolstoy’s The Kingdom of God is Within You, his own “lack of faith in non-violence vanished.”

Anyway, think twice before the next time you poke fun at War & Peace. If you think things on Planet Earth are bad, just imagine our world without the influence of Mahatma Gandhi. And by the great Bapu’s admission, we all owe a debt to the cantankerous Russian Count.

But back to “On Anarchy.”

Faced with the decision that violence itself is an unacceptable reaction to an unjust system, as well as “joining the ranks” of the system itself, Tolstoy came to the conclusion that the only thing he could do was start a revolution in his own heart.

Here’s what Tolstoy had to say, perhaps the most important, least-known sentence ever penned:

This indeed is where revolution starts. On the INSIDE.

Something to think about throughout today, which is the great Russian writer’s 186th birthday. Turns out he gave the entire world a permanent progressive birthday present: his words.

If you’re interested in reading another essay about peace, click on over to “Gandhi vs. Wolverine: The Adamantium of Peace.”

{Originally published on the website Forward Progressives on September 9, 2014. The website recently closed down without maintaining an archive. The original article received more than 10,000 views.}