Ashes to Ashes: An Elegy for Cigarettes

I loved every fag I ever had. Each one was my best friend—a friendship that began with a flame and lasted a five-minute lifetime.

For 15 years, cigarettes afforded me routine timeouts from all things great and small. Smoking was a social bubble that insulated me from reality. A thinking thermosphere. The best damned cross-country copilot. Also, a platinum membership card into the subculture of superlative cool.

But all the fags are gone. And now I’m just a humdrum hominid who goes about his day without a burning stick between his lips.

I quit smoking one year ago this month. While I suppose I could use this moment to celebrate my chosen path toward improved health, instead I find myself lamenting the absence of tobacco from my life. We had so many wonderful times together.

There were the daybreak ferry trips across the Bosphorus during Ramadan, where my insouciant smoking drove the nicotine-fasting men of Istanbul insane.

Also, the cartons that fueled my peripatetic exploration of Paris—especially the wee-hours-of-the-morning Camels that carried me from Pigalle to the Seine after I punched a harassing Algerian outside a brothel near Moulin Rouge, a lit smoke dangling from the corner of my mouth.

There were cigarettes in Tel Aviv, Prague, the catacombs and dance clubs of Rome, Amsterdam, Times Square, Reykjavik. Smokes down the Via Dolorosa. Outside the British Museum. In Petra’s wending al-Siq. Against ship gunwales en route to Patmos and Inishmore.

Then there’s the story behind this photo—now that was an epic night: 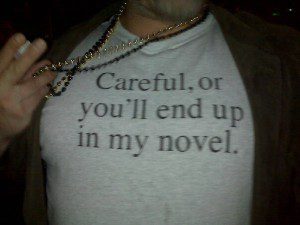 And those are just the romantic memories.

Let us not forget the myriad fags that served as time clock crutches during years of workday ennui. Even the worst webinar was made endurable knowing the curvilinear company of a cigarette awaited my sidewalk embrace. Tobacco was an equal escape from feuds with once and future wives as well as unreasonable bosses and aggravating customer service representatives.

Then, of course, there is the holy grail cigarette, the one I swore never to forsake (but did)—the fag that follows a bourbon-marinated porterhouse steak with blue cheese crumbles sided by a heaping pile of buttery mashed potatoes, grilled asparagus and Texas toast. O, how this far exceeds even the pure recreational leisure of post-coitus tobacco!

What I wouldn’t give for just one soft puff on a Marlboro 100. That would be as innoxious as a deep breath atop Everest. Right?

The origins of my nicotine addiction are a bit extraordinary. I spent the weekend of my 25th birthday in a Twin Cities pokey in the aftermath of pummeling my father. On a Friday afternoon, I discovered him abusing my mother, and, quasi-pacifist or no, I beat the ever-living shit out of him. My reward: sitting in a cell for a weekend whilst my crazy father sang in tongues in the adjoining cell. When Monday finally rolled around, the judge bid me happy birthday and sent me on my merry way back to my biblical studies graduate program in Chicago with the assurance that he would have done the same thing had he been in my shoes.

When I arrived back in Illinois, I felt the need for more than a dram of Johnny Walker to ease my stress. I purchased a carton of Marlboros and spent several days lighting Reds and sticking them in my mouth to ill-effect. Finally, a friend taught me how to inhale, and the stimulant began taking proper hold of my neural pathways.

If you’ve never smoked, you have no idea how important the concept of “my cigarette” is to a smoker. If one smokes Winstons, one might cringe at the thought of lighting up a Kool. Perhaps imagine a diehard Diet Coke drinker being offered a Diet Pepsi.

My smoke of choice evolved over time, from Lucky Strikes (L.S.M.F.T.!) to Camel Straights to Kamel Reds to Camel Filters to Camel Lights to Camel Ultralights—with a period of Camel Wides mixed in—and finally to Marlboro Ultralights, a cigarette so anemic that my time might have been better served just fanning myself with a tobacco leaf. The best cigarette I ever smoked was a Benson & Hedges Special Filter from England. To this day, I remain convinced this is the cigarette that Jehovah smokes on his Judgment Throne—only after a porterhouse, of course.

I am also reminded that Camel cigarette packs in Turkey say “American Blend”—versus the ones in the United States, which say “Turkish Blend.” Think marketing has nothing to do with addiction?

Ah, smoking culture. I could go on, but this essay is supposed to be a celebration of cessation. And at the moment, I’m rather tempted to drive up to the gas station and throw down ten bucks for a pack of Parliament Ultra Lights and a cheap Bic lighter. (By the way, for reasons unknown, I was always partial to orange lighters.)

A quitter’s one-year anniversary is supposedly a significant marker.

Our Little Blue Planet was somewhere in this neck of the solar system woods 12 months ago when I finally parted ways with tobacco, all thanks to a molecule known as 7,8,9,10-Tetrahydro-6,10-methano-6H-pyrazino[2,3-h] [3]benzazepine—also known as Varenicline. You may know the brand name better: Chantix.

My doctor offered me a several-month sample supply of Chantix with the warning that its foremost side effect is suicidal ideation plus dreams that can melt the soles off a pair of moonboots. As my dreams already tend to resemble a Star Wars cantina scene acid trip, I said why the hell not. Besides, not only was smoking expensive, but I was tired of hiding a serious addiction from my young daughter. It was time to slay Goliath.

So I rode the Chantix wave—definitely not something I would recommend to just anyone, honestly. Somehow I survived a several-month urge to throw myself from the top of the downtown skyscraper in which I work. As to the whacked-out dreams my doctor predicted, a fox-tailed lecher with a Ukrainian accent showed up in my nightly incubus soap opera.

“Hello, you must be Chantix!” I remember telling the molecule in my dream state.

Two months after I started Chantix, I was down to one or two cigarettes per day. Then I smoked a midnight cig and threw up. That was it. No occasional slipup. Fag Finito.

Now I chew toothpicks and chomp bubblegum occasionally. I hate e-cigs and other non-cigarette forms of nicotine absorption. I don’t preach to smokers, but if asked, I’ll note that it was wonderful rediscovering the taste of oxygen. Also, I might mention that it’s nice not waking up in the middle of the night from the sound of my own lungs crackling.

I remain tempted by the lure of smoking—sometimes I can’t tell if it’s more for the cultural accoutrements or for the hit. Or both. Probably both.

I was an addict. Am I still an addict? Maybe. But I have zero interest in the “once an addict always an addict” conversation. I don’t find it helpful for me.

The fact of the matter is: I quit smoking. I quit one year ago this month. But, damn, I miss every fag I ever had.

If the word “fag” offends, please note its formal definition as intended for the purpose of this essay { Slang. a cigarette } at Dictionary.com. It is interesting to note that the cigarette reference originally was “fag end,” as in the butt of a cigarette, and thus the connection to the word’s original etymological meaning as “loose end.”