There’s a Better Way: The Nightmare of a Trump-Cruz-Wilson Regime 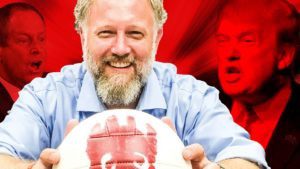 Good morning! You better sit down. Here, have a bagel. Need cream cheese? I’ve got a strong pot of coffee brewing. Trust me, you’ll want it black today.

Yep, that’s the morning paper. Last night’s General Election wasn’t a dream. It was a nightmare-come-true.

You have indeed awakened to an American Regime.

Donald Trump is Tyrant-Elect. Charlatan Ted Cruz is the de facto leader of the U.S. Senate. And Joe “You Lie!” Wilson continues his stagnant career in the U.S. House of Representatives as a Trump legislative henchman.

Fellow citizens, the frog is boiling in the pot. This stark political reality is mere months from happening.

Our Republican opponents know we’re worn out from the Presidential primaries. They know there’s a full calendar of cultural and athletic events waiting to distract us: March Madness, a summer of superhero blockbusters, then back to the gridiron in the Fall.

We’ll awaken to a Bombastic Billionaire in the White House, plus a Republican Supermajority in Congress. And the next thing you know:

The repeal of Obamacare and the reinstitution of preexisting conditions and routine medical care denials. Pick a battlefield, any battlefield! War in Iran—plus throw in War with North Korea for good measure. The end of unions, and the institution of “right-to-work” laws from sea to shining sea. The public lynching of “Black Lives Matter.” Forget North Carolina bathroom laws! How about the overturn of same-sex marriage and the reinstitution of sodomy laws after Trump replaces Scalia with Sarah Palin. Ken Ham will be named director of the National Science Foundation. A Monsanto chicken in every pot! Renewable energy, what the frack?! Solar power, schmolar power! And why fix bridges when it’s so much more fun to watch our aging infrastructure crumble before our very eyes.

The work of centuries of progressivism can be flushed away in the blink of an electoral eye. If you think I’m exaggerating, visit a state where the Tea Party has overtaken the governor’s mansion and both legislative houses.

This nightmare is that close to happening nationwide.

And when Government does its job—which is to protect and link individuals, communities, and industry—Government is a powerful, positive force. Better jobs and a better quality of life await us all when we ensure opportunities and security for all.

You have a choice. You can casually scroll past these words in your newsfeed, or you can stop and ask yourself: “What is my role in preventing the nightmare of a Trump-Cruz-Wilson Regime?”

Your voice, your hard-earned dollars, your every skill and breath are needed right now. Here are 3 things you can do to make a true difference:

1. “Liking” a post will not oust the destructive Wilson Dynasty from the Second Congressional District of South Carolina. Please contribute to our campaign.

2. Contribute to the campaign of the most progressive Congressional Candidate in your district. Again, just $10 makes a difference. (Not sure of your District? Here’s the “Find Your Representative” tool at House.gov.)

The South Carolina PRIMARY is JUNE 14. My primary opponent is a Fake Democrat who ran as a Republican in 2008, 2010, and 2012. Every Democratic Party official in the state knows he’s a stooge wolf in sheep’s clothing. This is why our campaign needs your help!

If we all play our roles, Civilization wins. If we sit on the sidelines, a societal nightmare will surely come to pass.

{Originally published on the website Forward Progressives on April 5, 2016. The website recently closed down without maintaining an archive. The original article received more than 100,000 views.}