The Caterpillar that did not Die in Vain 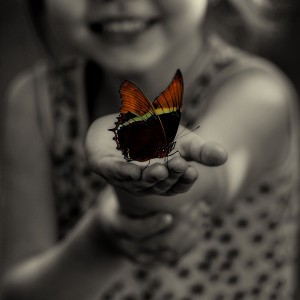 When I picked up my daughter Katherine from school the other afternoon, her class was on the playground. From a distance, I noticed that she and a number of her preschool classmates were huddled around something. There was so much shrieking and hullabaloo that at first I wondered whether the throb band One Direction was unexpectedly emerging from a hole in the ground.

When Katherine saw me, she ran to me; the news exploded from her lips like a balloon releasing all of its air at once. The class had discovered a worm. But there was, quite possibly, a cataclysmic end to this discovery: one of the boys had stomped on it. The group was now assessing the worm’s state of being. My adult faculties were immediately required.

Katherine parted her way through the throng and reached down to pick up the creature. Boys and girls shrieked. (My daughter has no aversion to creepy crawlies; we often engage in hands-on study of life forms on nature walks and elsewhere.)

She presented “the worm” to me: the half-pulped remnant of a bright green larva. I corrected the children that they had not discovered a worm but a caterpillar.

The children collectively oohed. My declaration automatically increased the creature’s perceived sacred worth. The beast was no mere worm but an animal capable of the great mystery of metamorphosis. It was the potentiality of a butterfly. Or had been. On this the children remained unsure.

Katherine asked me to pronounce the caterpillar’s state of being. Half of the tiny thing was mush. I broke the news and returned it to the playground sand. Upon hearing an adult’s formal declaration of death, the children immediately turned their attention to funerary rites. (Doubtless a mere worm would not have received such an honor.) One boy scooped up the once-and-former caterpillar and led his classmates on a quest for an appropriate burial ground.

Katherine remained behind and began to cry. She explained to me that she had begged the boy who stomped on it not to do so. Then followed a string of watery-eyed anecdotes about all of the boys and girls who regularly stomped little creatures whenever they saw them, much to her protest.

I hoisted my daughter onto my shoulder, and she released a year’s worth of sandlot environmental protest sobbing. She managed to blurt how I had taught her that all living things were sacred and that life should only be taken when necessary. Inwardly, of course, I was overjoyed to realize that the Reverence for Life philosophy of Albert Schweitzer had solidly taken root within my child’s mind.

We elected to skip the Lepidoptera funeral. On the way home, we continued discussing the matter. I explained the importance of butterflies—and worms—to the ecology. But, really, I was just repeating previous natural science lectures; my daughter finished most of my sentences for me.

We talked about the boy—the “Squasher,” as she called him. We wondered whether his parents had taken the time to explain to him about the sacredness and general miraculousness of life. I also shared how people are often scared of things they fail to understand; how they sometimes kill harmless bats that show up in their homes, which, while scary looking, are crucial to lowering the general insect population. My daughter reminded me of an incident the previous summer: at our community pool, we had watched a college-aged young man crush a honeybee in front of us. With my daughter wailing in the background, I had lectured that indolent Squasher of the global honeybee pandemic and that he should take the time to learn the difference between a hornet and a honeybee and think twice about such callous acts. (Not that hornets particularly deserve to be eradicated for taking a passing sniff at a Mountain Dew can.)

I encouraged Katherine to spend the next couple of weeks discussing the matter of “bug crushing” with her classmates—especially the ones who stomp out life seemingly for sport. I suggested she ask them why they do it; why they are afraid of “bugs”; why they think the creatures deserve to be stomped. In the case of creatures like worms and butterflies, I suggested she inform them why these living things are important to the environment and our lives.

We also spent time discussing how Reverence for Life is not a naïve way of looking at the world. There is life that must be taken. We do not spare the mosquito nor the bacterium—nor, generally, life which would harm us. And we must kill a fish to feed a pelican. (Those who have read Albert Schweitzer will understand.) But even in doing so, it is always worth pausing to consider the miracle of evolution contained even in a single-cell organism.

Most important of all, I told her that just as I was the one to teach her these things, she has an equal opportunity—power—to teach her peers. I emphasized that she must not teach her friends in anger nor with an attitude of superiority, but with humility, patience and persistence.

Finally, we discussed that, always, goodness can be borne from bad things, from tragedy. And, of course, my mind instantly leaped to the seemingly endless string of tragedies that have beset our nation and world the past few months. All of the senseless killings, drone strikes, factory accidents, even the natural disasters which would have been more limiting in their onslaught had society been better prepared.

As we pulled into our driveway, the scratchy frog in my daughter’s throat gave way to a voice of determined steel: “At least I stopped them from killing the spider.”

I know for a fact that the little green caterpillar did not die in vain. While it did not transform into a butterfly, it did further transform a child into an ethically aware human being.

Standing, as all living beings are, before this dilemma of the will to live, a person is constantly forced to preserve his own life and life in general only at the cost of other life. If he has been touched by the ethic of reverence for life, he injures and destroys life only under a necessity he cannot avoid, and never from thoughtlessness.

{Originally published on the website Forward Progressives on June 4, 2013. The website recently closed down without maintaining an archive. The original article received more than 100,000 views.}