Humanity, Not Quite Ready for Civilization: Enemy-Making, Resistance is Everything 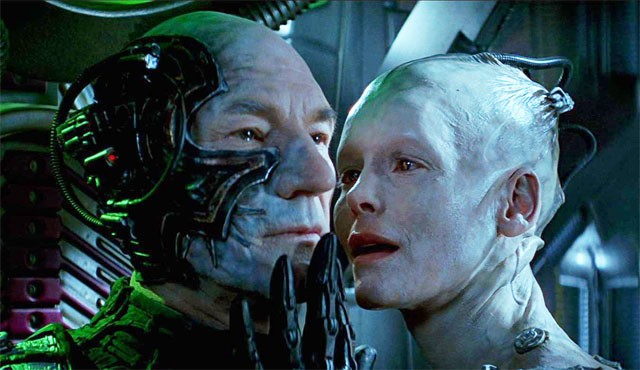 Click to read Parts 1, 2, 3 and 5 in the “Humanity, Not Quite Ready for Civilization” series.

Enemies. Imagine a world without them. Yeah, that’s usually how most genocides start.

Have you ever noticed that humans seem to need enemies? How, even in relatively peaceful conditions, we hominids go far out of our way to create a reason, to invent a false border, in order to declare our fellow thinking biped an adversary?

Case in point: we have reached that point in the calendar when Americans devote weekend time to decorating themselves in preparation for pigskin war against their fellow citizens. Metropolitan area will march against metropolitan area. Institution of higher education will stand against institution of higher education. Hatred and violence will ensue. (Seriously.) And all in the name of be-helmeted jocks advancing a leather prolate spheroid across a rectangular playing field at great risk of concussion and ligament snapping.

For this reason, Ohioans shall rise up against Michiganders. Tigers shall stand against Gamecocks. And [email protected] shall cornerback blitz Cowboys. (And, well, everyone should despise Dan Snyder for perpetuating that racist slur of a mascot.) Also, Catholics shall oppose Trojans—and it has nothing to do with papal edicts against birth control.

Is it any wonder how the Global Military Industrial Complex so easily plays the nations of the world against one another?

Not too long ago, I was seated at a dining room table with some dear European friends. We were deep into an evening of earnest political conversation; most of the kids were passed out on beanbags with a Star Wars film running. There were a couple of drained bottles of wine. Someone had finally cracked open a bottle of Unicum.

Our progressive dinner party was engaged in a deep discussion of Global Angels & Demons. We took turns sanctimoniously intoning from the Scroll of Civilization: Israel and the Palestinian plight. Australians and Aborigines. The U.S. military and any nation with a surfeit of sand (and oil). Then I mentioned Europeans and Gypsies.

“My God, they never bathe. You can smell them a mile off.”

“No! Gypsies! They’re a blight across the entire continent. They refuse to let their children be educated.”

“Yeah, they marry within their own.”

“Misogynists. Barbarians. The Somalis of Europe.”

I couldn’t believe my ears. These were the most open-minded people I knew on any continent. I challenged their insensitivity.

“Trust us, you couldn’t understand unless you saw them for yourself.”

“Well, how many Gypsies do you know?” I asked.

I imagine a similar string of epithets was pronounced by the Dominican Republic Constitutional Court during its mindboggling 2013 ruling to strip tens of thousands of DR citizens of their citizenship for no reason other than that they are of Haitian descent.

By the way, the 2015 (as in now!) implementation of that ruling appears to be placing an estimated 200,000 human beings “in legal limbo and stateless.”

This particular example of Enemy-Making dates back to the Haitian Revolution. Yes, it’s true that Europeans brutalized the indigenous and slave populations of the island of Hispaniola going all the way back to Columbus. Yet once Hispaniola’s slave populations achieved independence in 1804, the French and Spanish-speaking sides of the island bludgeoned one another, and continued doing so up through the DR Trujillo regime in the 1930s. Then Papa Doc Duvalier showed up in Haiti in the 1950s, and Haitians had their own Tonton Macoute problems to worry about until the late 1980s. Meanwhile, during these decades, a cheap Haitian workforce had been allowed to trickle across to the DR side of the island, until finally it dawned on Dominicans two years ago that it had allowed too many dark-skinned Haitians to emigrate for everyone’s cultural comfort.

And to think this island achieved such levels of hatred without the help of sport ball.

You can see where this essay is heading. To steal a line from King Solomon, ‘Of making many enemies, there is no end.’

As we mentioned in Part I of this series, Wikipedia’s “List of Genocides by Death Toll” article is so long that it has a built-in ‘alphabetize’ function. If human beings excel at anything, it’s inventing colorful reasons and justifications to antagonize, vilify and brutalize one another.

Here’s one of my all-time favorite historical examples of Enemy-Making: the ancient Romans found the Christian rite of the Eucharist, the partaking of the body and blood of Christ through bread and wine, so ghastly that they accused the early Christians of cannibalism, and thus discovered a fresh reason to torment and execute them. Not to be outdone, medieval Christians, seemingly discontent with merely decrying Jews for deicide (killing God via the Crucifixion), also added the finger-wagging accusation of cannibalism. Someone must have recalled how well this had worked for the Romans. Jews didn’t have a rite anywhere near as convenient as Communion for such an accusation, so Christians imagined that Jews required human blood—particularly the blood of Christian children—for the baking of Passover matzos. And, of course, torture and murder ensued.

It’s probably only a matter of time before Donald Trump begins accusing African-Americans, Mexicans and the Chinese of turning Caucasians into Wonder Bread.

The other is among us.

This other speaks a different tongue.

This other is a different shade of skin color.

This other follows another creed.

This other competes with me for resources.

This other wants to marry my children.

This other stole my cab.

This other is a Bears fan.

This other wears white after Labor Day.

This other is my Enemy.

This other must be eliminated. Resistance is futile.

It is easy to blame the Global Military Industrial Complex for many of our planet’s woes, but the GMIC is nothing without the Enemy-Making fuel that drives that engine—a fuel that exists within all of us. It hurts to be fair-minded—this is going to sting—but progressives are just as guilty of Enemy-Making as any other group. Yes, those who swear by Fox News are antithetical to us in many ways. Yes, those who read books penned by Bill O’Reilly and Rush Limbaugh and who deny everything from Evolution to Global Warming seem to be as far removed from us as ISIS is from Indiana Jones.

But are progressives any better than “them” when we use the language of Enemy-Making in our personal politics? What have we become when we no longer bat an eye when using terms like “destroy” or “crush” or “dismantle” to discuss individuals on the other end of the political spectrum? Are conservatives truly our enemies? Or is there perhaps a way to blaze a path toward peaceful political solutions without engaging in the culture of Enemy-Making?

Just something for us all to think about—especially as we head into another Presidential Campaign season.

Over the past few weeks, this series has explored the question of whether human beings are anyway near capable of universally recognizing that all 7.2 billion-plus human beings on our Little Blue Planet are entitled to nourishment, education and dignity. One might call this Civilization—or as I have described it elsewhere, Martin Luther King Jr.’s Audacious Ethical Foundation for Civilization:

I have the audacity to believe that peoples everywhere can have three meals a day for their bodies, education and culture for their minds, and dignity, equality and freedom for their spirits. I believe that what self-centered men have torn down men other-centered can build up.

Some appear ready. Others, not so much. Not to name names, but Roger Ailes, Dick Cheney, Vladimir Putin, Abu Bakr al-Baghdadi. Ahem.

I used to think that there were two pathways before us as a planet from which to choose: either the lard-bucket laziness of Idiocracy or Gene Rodenberry’s optimistic Star Trek. But there is definitely a third path—in fact, it’s the path nearly all human societies have been on since the Bronze Age.

Enemy-Making—or as I also like to call it, Barbarism—requires industriousness. Human beings often find nothing wrong with selecting Agent Orange or White Phosphorus as a solution to deal with those who differ with them on anything from chunky versus smooth peanut butter to religion to political philosophy. And someone’s got to mix and market all those chemicals.

The world runs on enemies.

Maybe it’s time we did something about that.

The following is a joke every Minnesotan knows by the time he or she enters middle school:

One day, a Wisconsin farmer got sick and tired of Minnesotans making fun of his state, so he walked up to the border and threw a hand grenade toward the Twin Cities. A Minnesotan farmer came along, picked up the grenade, pulled the pin, and threw it back.

This is how Enemy-Making begins. Differences are identified; fun is poked.

My home state is on one side of an arbitrary border formed by an Act of Congress in 1849 and shaped by rivers and invisible parallel markers. (Don’t ask the Dakota Sioux and Ojibwe what they think about that, by the way.) Over here, Minnesotans make Cheerios, invite Hmong and Somalis into our community, and pretend to eat lutefisk at Christmas time. Over there, Wisconsinites make cheese, vote for Scott Walker, and spend most of their time these days ruining public unions.

It’s pretty hard to tell apart a Scandinavian Protestant from a German Catholic—let alone a wheat farmer from a corn farmer. But so as long as Minnesotans and Wisconsinites keep soaking up the socioeconomic advantages of U.S. white privilege—apologies to the nearly 400,000 unlucky African-Americans in both states—there’s no real need to kick it up a notch to marauding or genocide or threatening divine annihilation. For now.

Of course, as everyone know, the one true enemy of Vikings fans and Packers nuts are Iowans.

How come the Mississippi River flows south from Minnesota? Because Iowa sucks.

But it doesn’t, really. And Iowa is actually a rather nice place. And most Iowans are rather nice people. As are Wisconsinites.

Well, maybe not them. Because Internet Explorer truly does suck. They are the true enemy. Right?

And so it goes.

{Part 4 of a five-part series, “Humanity: Not Quite Ready for Civilization,” published on the website Forward Progressives from May 2015 to October 2015. The website recently closed down without maintaining an archive. The series received more than 1 million views.}