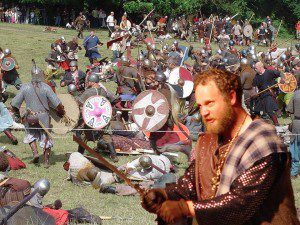 Tonight’s “Fireside Chat with Arik” might have something to do with a major Evangelical college reopening its academic pearly gates for students and microbes alike. (Some might call it the Covid Crusade.)

It might have something to do with Trump’s approval rating reaching an all-time high. And, yes, that was Sophia, the goddess of wisdom, passing out at the bar.

It might even have something to do with the federal stimulus package containing that “Middle Finger to the Poor and Seniors” subsection. (Yes, seniors like my elderly, chronically ill mother will be the benefactor solely of the thoughts and prayers of asshole politicians.)

But, first, the Dunning-Kruger Effect. Let me paraphrase the American Psychological Association’s PsycNET abstract on the original study:

There’s a reason your Uncle Bart can’t shut up at Thanksgiving Dinner, even though every opinion he’s ever spouted from his green bean casserole-stuffed mouth defies any kind of factual basis. And there’s a reason your MAGA hat-wearing neighbors are all playing Fat-Fold Twister while meat sizzles on the grill.

In short: They’re too stupid to realize just how stupid they are. Not only that, on account of the fact that they can’t detect they’re idiots, they “are often blessed with an inappropriate confidence…”

I think the Dunning-Kruger Effect is really important for us to digest intellectually right now, because all of the intelligent, rational people I know are experiencing actual pain as they try to wrap their heads around such a tsunami of dithering nonsense.

Henry McMaster seems happy just to let South Carolinians die at some soon-to-be announced date—and he’s hardly the only governor doing this. Fundamentalist pastors all across the country are convinced that this is a great time for the throngs to gather for a potluck and an ol’ time revival.

We can’t just dump this all at the feet of Trump, either. Look at the city of Pittsburgh, where the city’s sanitation workers are refusing the refuse, as it were, because they’re performing one of the most dangerous jobs in society without proper pay and equipment. And can you blame their revolt? But, hey, just what the hell was the Pittsburgh City Council doing since March 11, when the World Health Organization declared a global pandemic?

PEOPLE: WE KNEW THIS WAS COMING.

That said, Trump does of course deserve a good bit of the blame, too. Let’s call it Trump-onomics. Tons of stupid at the top, and it just trickles down to every level of society.

I really, REALLY want to write pages and pages about how Evangelical Christianity and general religious fundamentalism is fueling a lot of the COVID-19 Dunning-Kruger Effect fire right now. First of all, a good many of the morons in Washington—and in state legislatures and municipal government bodies—are there because of a long-term and amazingly well executed plan by Evangelicals (think Pat Robertson, Jerry Falwell, The Family) to secure political power with all their ill-gotten gains.

That history is fascinating, but we don’t have time for it here.

If you’d like to read a bit about it now, you can do so via my article, “What the Hell is Christian Fundamentalism?”

I’ve also penned a book called “The R-Rated Theologian,” which delves into the history and subculture of Evangelical ‘Murica:

Here’s the essence of moronic response to COVID-19. I also think it goes a long way to defining the behavior of the average fundamentalist. We’ll call it The Bjorn Effect.

Citizen Bill is, sadly, too stupid to know he’s stupid. But he does know a few things: He wants to go to Heaven, not Hell. He’s mad at the government for making him pay taxes. He wants Mexicans and gays and other people not like him to stop ruining his life and threatening his family.

(Oh, and by the way, Citizen Bill could just the same be Citizen Brenda.)

Citizen Bill comes home from that job at the end of the day. He’s tired. He watches a dumb sitcom or Monday Night Football. He also has to deal with the wife and kids. He’s exhausted by the end of it all. He certainly doesn’t have time to read a book or do anything that informs or challenges his worldview.

Then, suddenly, one day, Citizen Bill has to make a decision somehow related to religion or politics. Or just life in general. Holy crap! What to do?!

Thankfully, Citizen Bill has already surrendered all of his cognitive abilities to his pastor, to Fox News, to Rush Limbaugh, to Lindsey Graham, etc. Because they reinforce his already devoid-of-thought-and-intellect worldview.

In short: Citizen Bill knows he needs answers, but at this point, he also has no way to obtain them. So Citizen Bill puts 20 bucks in the tithe plate to get the answers he needs about God: such as, these are the End Times and Trump is fulfilling an essential part of the Book of Revelation. And Citizen Bill gives 20 bucks to Trump or Joe Wilson to keep all the Mexicans and gays at bay—which is also what Jesus wants, so that’s a BOGO.

What to do about COVID-19? Well, Jerry Falwell Jr. thinks those Liberty University students are safe swapping spit, so why should I self-isolate? And Trump says it’s all a hoax, and all these other governors who like him seem to agree. So screw it, I’m hosting a Bible Block Party this weekend, and we’re sending seniors to the slaughter!

Fundamentalism exists because life is hard. It’s just so much simpler when you let other people think for you. And funny how those “other people” drive such hateful, enemy-creating agendas that somehow also line their wallets and purses.

Let me point you in the direction of the original Dunning-Kruger study, “Unskilled and unaware of it: How difficulties in recognizing one’s own incompetence lead to inflated self-assessments”:

For other resources, here’s the article about Trump’s approval rating:

Here’s an article about Jerry Falwell Jr risking the lives of all his Liberty University students: